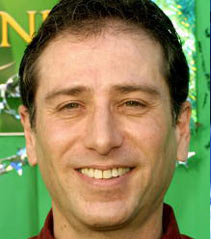 Corey Burton (born August 3, 1955) is a voice actor, perhaps best known as Count Dooku, Ziro the Hutt and Cad Bane in Star Wars: The Clone Wars, Brainiac in the DC animated universe, Spike Witwicky and Shockwave in the Transformers Universe, and as Captain Hook in Disney's Return to Never Land.

==Career==Corey Burton began his career at age 17, in an imitation performance of voice actor Hans Conreid for Disney. He studied radio acting with Daws Butler (Time for Beany, Merrie Melodies, Yogi Bear) for four years, and went on to work with nearly all of the original Hollywood radio actors in classic-style radio dramas. He has also done numerous cartoon series for other networks, such as Cartoon Network.

In addition, Burton has done extensive voice work for Disney including feature animations, theme parks, interactive sections of the company, and attractions at the Disneyland Resort, Walt Disney World Resort, and Tokyo Disney Resort. He also provides the "Feature Presentation" voice on numerous Disney videos. He also overdubbed the voice of Fantasia MC Deems Taylor for the film's 2000 re-release, as Taylor's original soundtrack had deteriorated.

===Other voice roles===Corey Burton did the voice of Cheester in Reader Rabbit Math Adventures Ages 6–9. He also voiced The Footman, Bricabrac, Goggles, the Fluffy Show Announcer and the WACME Quiz Master in the 1996 adventure game Toonstruck.

====Star Wars====Corey Burton is also known to Star Wars fans as the audio double for Christopher Lee as Count Dooku in Star Wars: Clone Wars and several Star Wars video games. He appeared as Ziro the Hutt and General Lothsome in Star Wars: The Clone Wars and also appeared as Captain Mar Tuuk and Cad Bane and reprised his roles as Count Dooku, Ziro The Hutt, and General Lothsome in the movie's television adaptation.

==Other roles==
*The Scarecrow, The Chechen and Marshall in Batman: Gotham Knight
*Numerous supporting roles on Focus on the Family's radio drama Adventures in Odyssey, most notably Jesus Christ, Shakespeare, Cryin' Bryan Dern, and The Great Wishy Woz.
*Volteer in The Legend of Spyro: A New Beginning, The Legend of Spyro: The Eternal Night and The Legend of Spyro: Dawn of the Dragon
*V.V. Argost and Van Rook in The Secret Saturdays
*James Bond Jr. in the animated series of the same name.
*The Pupununu in Tak and the Power of Juju
*Whitebeard in One Piece
*Invisibo in Freakazoid (here, Burton's voice sounded exactly like that of Vincent Price's)
*The Narrator for Brütal Legend
===Paul Frees===Burton is perhaps best known for his imitation of the late Paul Frees as the Ghost Host in Disneyland's Haunted Mansion Holiday attraction, as well as providing the same voice for Walt Disney World's HalloWishes fireworks show during Mickey's Not-So-Scary Halloween Party event. He was also approached to record a new safety spiel for the beginning of the ride. He agreed to do this under the condition that it was only an addition and did not replace any of Frees' original dialogue. Since this was not the case, he declined and the spiel was instead recorded by voice actor Joe Leahy; petitions are now being drawn either to have Frees reinstated or for Burton to re-record it. Burton also recited the classic line "Welcome, foolish mortals" in the opening of the film version of The Haunted Mansion. He performed another Frees imitation for the second volume of Stan Freberg Presents the United States of America.

In the Critters film series, he provided the voices for the Crites, but he was only credited for the first one, and he also developed their language (as revealed on his website).

In G.I. Joe he voiced Tomax. He has also starred as the evil antagonist Kanawk for the cult 1980s cartoon Robotix, as well as taking the roles of Goon and Tauron. He is also the voice of Trommel Guado and Maester Kelk Ronso in the PlayStation 2 video game Final Fantasy X. He voices Zeus in the video game God of War II for the Playstation 2, resuming his role in the God of War III trailer.

Burton does voice-overs for many commercials and promos; for instance, Burton's voice is featured in some Old Navy commercials, which he inherited after the death of Bill Wendell. He recently provided his voice for the Final Fantasy XII TV promo.

In the WWE, Burton provided voice overs for the WrestleMania XXV Recap segments.

Retrieved from "https://voices.fandom.com/wiki/Corey_Burton?oldid=3393"
Community content is available under CC-BY-SA unless otherwise noted.